East to West – Georgetown to camp and everything in between

After racking up miles for today I arrived in the Georgetown/ Arlington, VA area. It was around 3:00pm and I’ve been riding for 8 hours. I felt good to keep pushing but decided to try and find an Airbnb in the area to take it in for the night and check out the city. Upon my phone dying, I found a place to relax in the sun and charged it using my Voltaic battery. Arlington, VA. Is a huge bicycle friendly city and extremely lively during the day. I met several people who asked me about my travels, including Jon who offered a room at his house. Jon road across the country by bicycle twice in the 80’s and I wanted to hear more about it. So he gave me an address and said he’d be home in a few hours.

I took a stroll around the city and decided it was appropriate to grab a beer after all the riding in the sun. Afterwards I noticed my pannier clasp that catches the rack with all my photo gear was broken. During my earlier venture through town I saw Bicycle Pro Shop on M Street in Washington D.C. and dropped in to see if they can help with a quick repair. Right in the door the guys there were super cool, and helped me out big time. I met Chris and Tom who both work the shop. Chris is also owner and publisher of Cycle Boredom and Tom is a musician and lead mechanic at the shop. They were psyched that I was taking on the trip but also the fully loaded bike I was riding. They got everything fixed up and provided extra hardware in any event it gave out again. 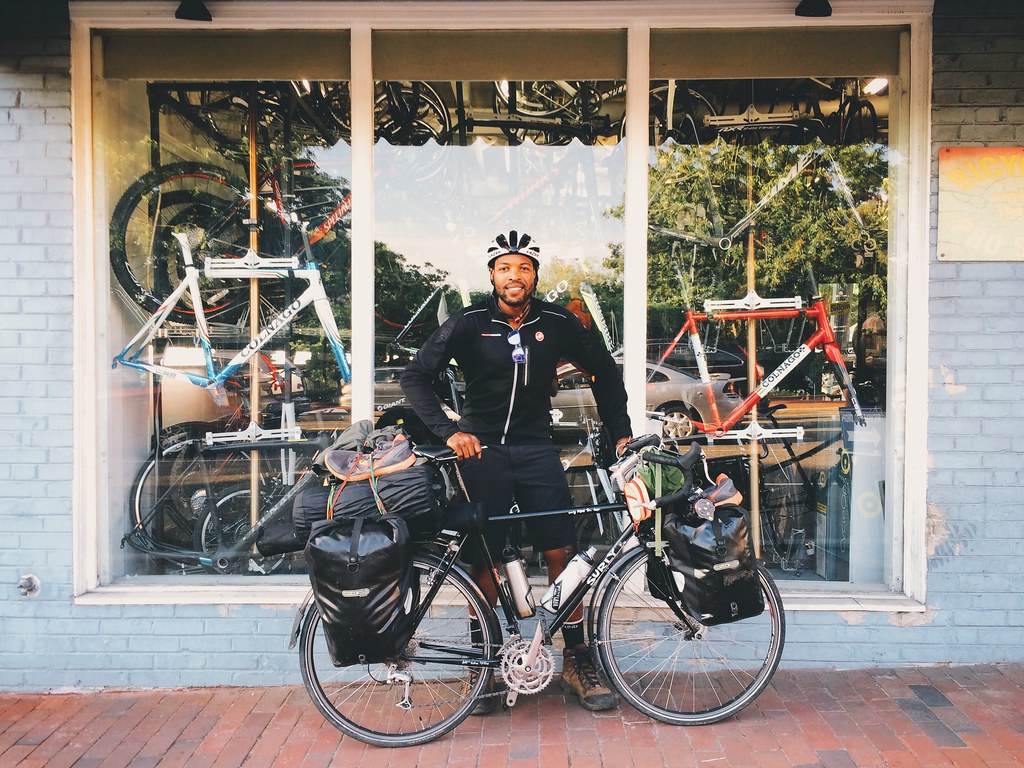 Last night was great at John’s place where I met his wife who also biked across country with John and his two daughters. We had dinner, talked bikes, laughed and had a good time. Before calling it a night John shared his old route with me and gave me lot’s of information on the roads and weather heading further west.

Off to a great start this morning at John’s place. I started packing around 5:30 a.m. ate breakfast with John coupled with a cup of coffee. We talked about biking a bit more and he helped me load my rig along with a short ride into town together. I decided to do a bit more riding through the city before I set out so I rode to the Washington D.C. area.

Later that day I ended up outside of Dale City, VA where I found a National Forest where I camped for the night. I met Taylor who was nice to share his campsite with me. There we hung out shared for a bit and took it in for the night.